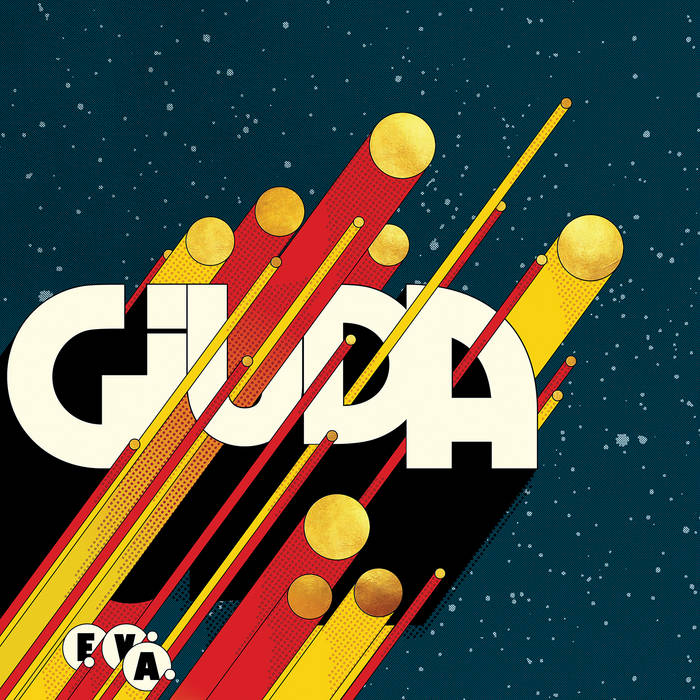 Stripping the history of glam rock for parts and using what's left to build a new souped-up rock & roll machine, Italy's Giuda merged the hard-stomping sound of "junk shop glam" acts like Slade, Mud, and the Sweet with the swaggering energy of first-generation punk. Through album's like 2010's Racey Roller and 2015's Speak No Evil, the Roman quintet built a sturdy international fan base, touring across Europe and the U.S. and eventually signing with American label Burger Records to release their fourth outing, 2019's E.V.A.

Giuda were formed in Rome in 2007 by lead vocalist Tenda and guitarist Lorenzo. Both had been members of the noted Italian punk band Taxi, but after the unexpected death of their drummer Francesco, that group split up. Several months later, Tenda and Lorenzo felt ready to make music again, but decided to start a new project; teaming with onetime Taxi bassist Danilo, and new members Michele on guitar and Daniele on drums, the band adopted the name Giuda (Italian for Judas) and began playing gigs. Embracing a sporty look (the bandmembers often reference their passion for football) and a sound that paid clear homage to the commercial end of British glam rock of the '70s, Giuda soon developed a live following and released their first album, Racey Roller, in early 2010, packaged in a cleverly designed sleeve that looked like a vintage glam LP rescued from a junk shop. Giuda supported the album with heavy touring in Europe, the U.K., and the United States, making plenty of new friends along the way. Noted glam rock fan Joe Elliott of Def Leppard praised the band, saying, "When I heard Racey Roller, I was p---ing my pants laughing, because it's so brilliant, so exhilarating and fun." In 2013, Giuda released their second album, Let's Do It Again, featuring "Hold Me Tight" and "Wild Tiger Woman." They followed that with another collection of glammy stompers and sweaty rock fun on their third album, Speaks Evil, in late 2015. Over the next few years Giuda focused on releasing a series of singles including 2017's "Rock 'n' Roll Music" and a 2018 cover of Elton John's "Saturday Night's All Right for Fighting." They resurfaced with their fourth full-length, E.V.A., in April 2019, this time via California's Burger Records. ~ Mark Deming, Rovi

Giuda is a five-piece band from Rome, Italy. Their mix of anthemic ‘70s glam pop hooks and the punchy delivery of early UK punk, has stunned listeners all across the globe.

Bandcamp Daily  your guide to the world of Bandcamp

Featuring appearances from Kari Faux, Bluestaeb and and interview with NY-bred artist Wiki